We have recently appointed Stephen Crabb to the position of Head of Site Operations based at our Lostock site. 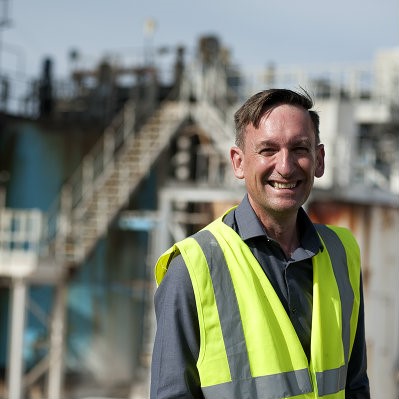 As part of our ongoing focus on ensuring optimal performance, through robust engineering and maintenance at our sites, Stephen took up his new post just over 100 days ago and he and his team have already introduced several new initiatives, whilst also gearing up for the major £30 million investment scheduled for the Lostock location in the coming months.

Stephen is an experienced business leader with a demonstrable track record in operational management, gained across a number of sectors, including chemicals and engineering, with particular focus on driving safe and profitable continuous improvement. Prior to joining the Lostock team, Stephen - who has been at TCE since December 2016 - headed up operations at British Salt in Middlewich and has guided the team through various exciting new initiatives, including the introduction of new state of the art automated packlines and the initial stages of the ground breaking new  British Salt boiler plant facility that’s scheduled to become operational in Spring 2020.

“Lostock’s soda ash and bicarbonate is the linchpin of our company’s production and it is pivotal to the whole TCE ecosystem. Our soda ash production plant is fundamental to meeting the demands of TCE’s current and future customers. We are looking at continuous improvement initiatives to guarantee consistently stable and reliable production here for many years to come at Lostock, whilst also ensuring the highest standards of safety for our team. My remit is to look at potential further improvements across all areas of Lostock operations, focusing on maintaining maximum plant uptime, whilst also guiding through the major capital projects we’ve committed to for the site. We’re fortunate that we have a highly experienced team in place that’s complemented by our apprenticeship initiative and our emerging leaders and talent progression programmes, offering the right blend of skill sets to meet our customers’ requirements."

“I am examining on all aspects of operations, with my current focus being the commissioning of our new investments in plant and production of sodium sesquicarbonate, which although it is a relatively small percentage of our overall production, is nonetheless extremely important."

“We will focus on the three key pillars of production, cost and safety. Over at Lostock we are poised to deliver 15 new capital projects covering production specifically, in addition to the new developments onsite such as our involvement in the new Energy from Waste plant project.”

With Stephen at the helm of site operations, Lostock is performing well, and this cornerstone of our company-wide production capabilities is making a very valuable contribution to our company’s current and future success.