40 years-ago this month, Chris Foxley joined ICI Alkali laboratories at Winnington to start what would be a long and illustrious career at Tata Chemicals Europe.  The year was 1978, the Bee Gees were dominating the charts, James Callaghan was the Prime Minister, audiences flocked to the cinema to watch Danny pursue Sandy in Grease. 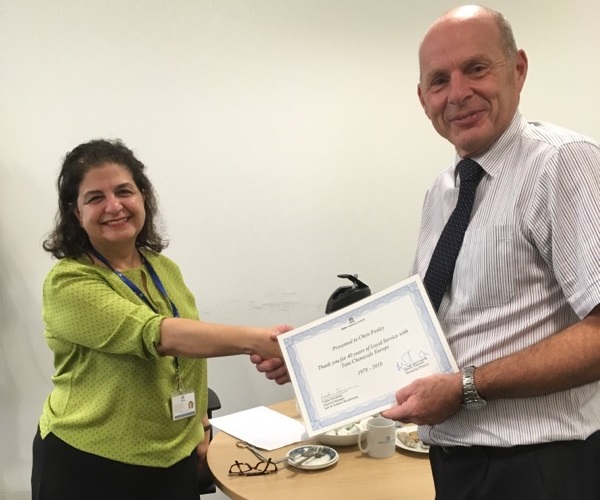 Reflecting on those early days Chris said, ‘My first role was in the research department as a Lab Assistant in the Alkali group. In those days we were conducting large scale chemical experiments on ammonia soda problems. I was 18, straight out of school and I can still remember the excitement at going from bench analysis in a school classroom to what was a large scale chemical process. I also remember thinking how welcoming everyone was and although I’ve seen a lot of change over the last 40 years, the people I work with are still some of the nicest I know.’

Chris has seen many changes over the past 40 years, he said, ‘It is and always has been a great place to work and I feel lucky to have been able to enjoy such a varied and interesting career. Over the last 40 years I’ve witnessed a lot of change in the chemicals industry, from the move away from certain alkali products to the introduction and development of automation of plants and laboratories.”

Working in TCE across Soda Ash and Bicarbonate, Chris also has a string of international projects to his name and was influential in the design of the bicarbonate plants at Lostock, Delfzijl and the Winnington standalone bicarbonate plant.

Now Manager of Special Projects Chris has had lots of cause for celebration so far in 2018, having recently been awarded Fellowship of the Royal Society of Chemistry.

Presenting Chris with his 40 years’ service certificate Ladan Iravanian, General Manager for Salt and Sodium Bicarbonate said, ‘Chris has been a huge asset to the company for the last 40 years and I want to personally thank him for his service so far and congratulate him on this significant milestone!’

Summarising his feelings on this 40 year landmark Chris said,’ I’m still so proud to work for this company. The varied and interesting work and the people are what’s kept me here for the last 40 years! Looking forward, there are lots of exciting growth projects keeping me more than busy for the foreseeable future!”