The past three months have seen strong progress, with the Carbon Capture and Utilisation plant at our Winnington site starting to take shape.

In early September we hit a major milestone in the project. The 48m tall absorber column and the 27m tall stripper tower, the former weighing 93 tonnes were both lifted into place, taking their place adjacent to the 60m tall CHP stack.

Meticulous planning meant that, whilst the preparation for this took months, it took only an incredible 50 minutes to transform the skyline with the actual lift of each one.  Reliant on good weather, lifting of equipment of this size is no mean feat, requiring two large cranes equivalent to those used for large infrastructure projects like bridge building. See the timelapse video on the left to see how our project has progressed over the past three months.

During this period, we also placed the three large CO2 storage tanks in their final position and installed the majority of the main process skids, including the liquefaction unit.

The liquefaction unit is the final stage of the CCU production process. Concentrated carbon dioxide gas leaves the stripper tower and is cooled, compressed, dehydrated to remove water and filtered to remove any fine impurities. As a result of this process, the gas is also converted into liquid carbon dioxide that is then transferred to one of the three storage tanks. At this point it is ready for use in the manufacture of sodium bicarbonate. 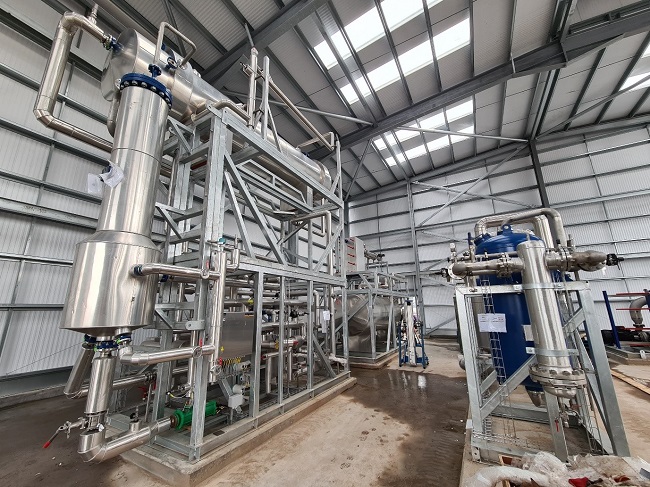 “It is fantastic to see the CCU plant take shape. A lot of hard work by our team and contractors made it possible to install the process vessels in early September and seeing them in place was a really exciting moment for everyone involved in the project. This milestone shows that we are on track to deliver captured carbon dioxide to our sodium bicarbonate plant in early 2021 and make use of carbon dioxide emissions that would otherwise be released into the atmosphere.”

By the end of October much of the major equipment has been installed, and over the next 4 months, the equipment will be connected with pipework, electrical and control systems and the buildings housing the process will be completed. The ducting is due to arrive in December, with the final installation due to be complete in the first half of 2021.