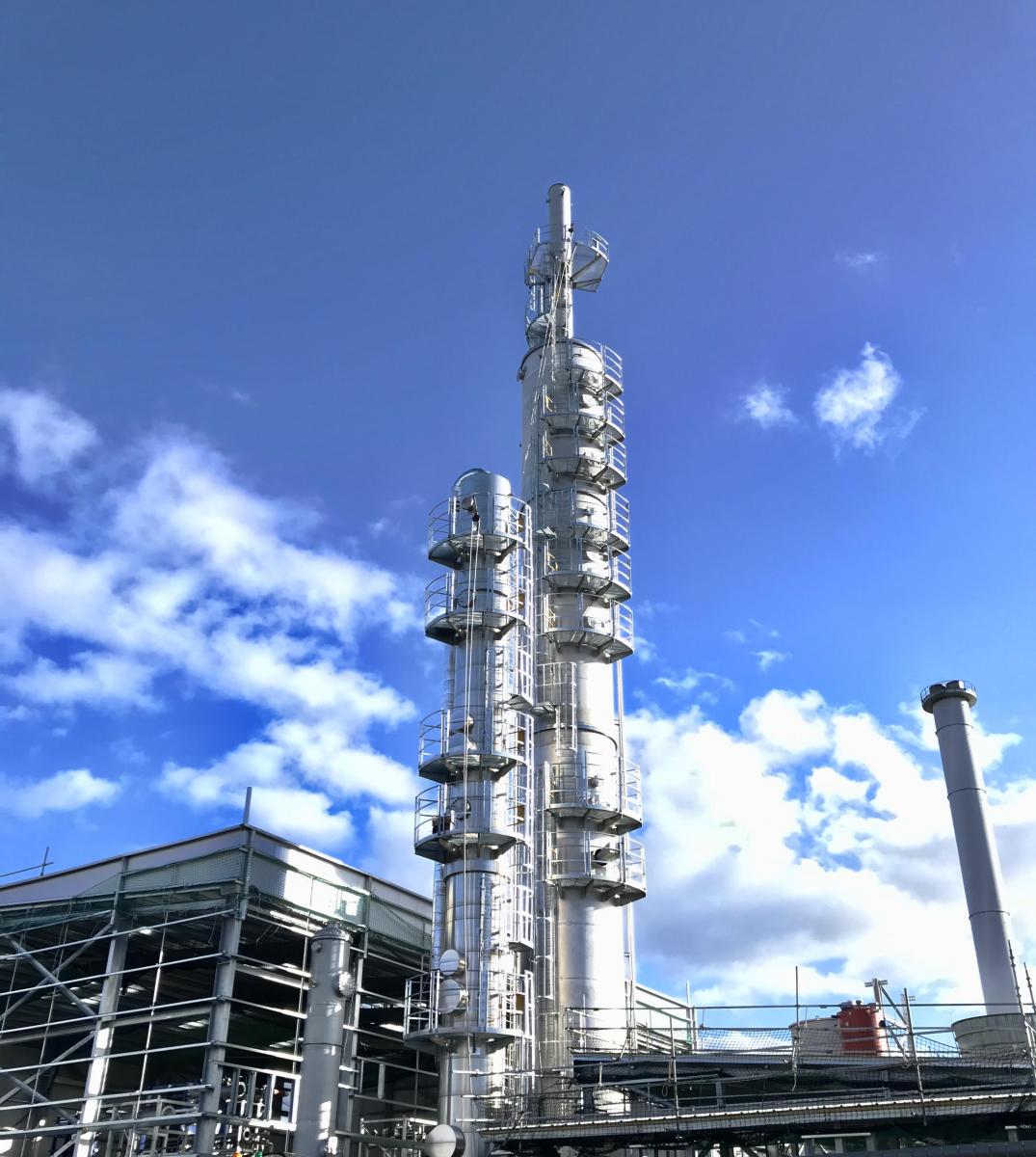 Tata Chemicals Europe is now manufacturing one of the lowest carbon footprint sodium bicarbonate and sodium carbonate products in the world. These chemicals are used to make a wide array of everyday items seen in many households.

Already generating heat and electricity from one of the most efficient combined heat and power plants in the UK, the carbon footprint of our operations in Northwich has been significantly reduced following the completion of the UK’s only industrial scale carbon capture and utilisation (CCU) plant. This plant will enable more than 10% of carbon dioxide produced by our combined heat and power plant (CHP) to be recycled, purified and used as a key raw material to produce high grade sodium bicarbonate.

In June 2022, Mike Amesbury, MP for Weaver Vale, officially opened the UK’s first and largest industrial scale carbon capture and utilisation plant, enabling us to make the world’s first carbon neutral sodium bicarbonate. Supported by a £4.2m grant from the Department for Business, Energy and Industrial Strategy (BEIS), the £20m investment at our Winnington site captures 40,000 tonnes of carbon dioxide each year - the equivalent of taking 20,000 cars off the roads.

In a world first, carbon dioxide captured from energy generation emissions is then purified to food and pharmaceutical grade for use as a raw material in the manufacture of sodium bicarbonate, which will be known as EcoKarb® and will be exported to over 60 countries around the world. Much of the sodium bicarbonate exported will be used in haemodialysis to treat people living with kidney disease.

“The CCU demonstration plant enables us to reduce our carbon emissions, whilst securing supplies of a critical raw material, helping to grow the export of our products across the world."

Speaking at the opening of the plant, Mike Amesbury, MP for Weaver Vale said: “Manufacturing has been key to this area for over 150 years so it’s great to be part of such an historic moment. Even though, today, there are many competing agendas, sustainability is still crucial and we must continue working towards Net Zero. 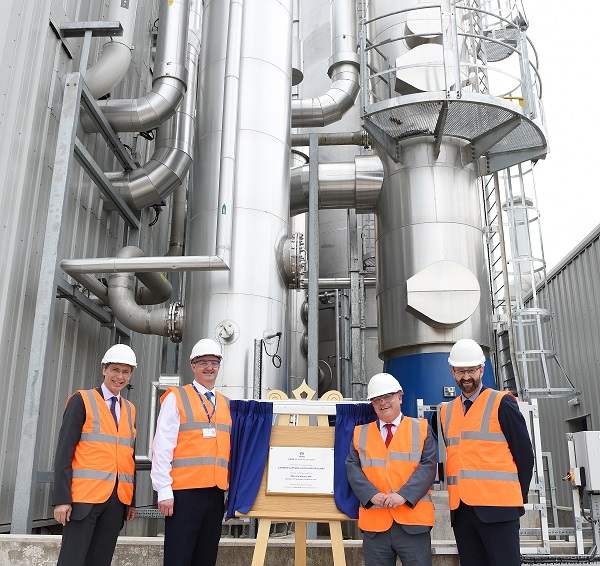 “The investment made by Tata Chemicals Europe in this leading-edge carbon capture plant will not only support the reduction of carbon dioxide emissions here, but it will also pave the way for others to use this technology. Tata Chemicals Europe helps support over 1000 jobs so this type of sustainable investment will help secure chemical manufacturing in Cheshire for future generations.”

On this page you can find out more about this exciting project:

Why is TCE Invested in this CCU Plant

Our CHP is a Source of Low Carbon Electricity

How We Capture Carbon Dioxide

How We Purify Carbon Dioxide 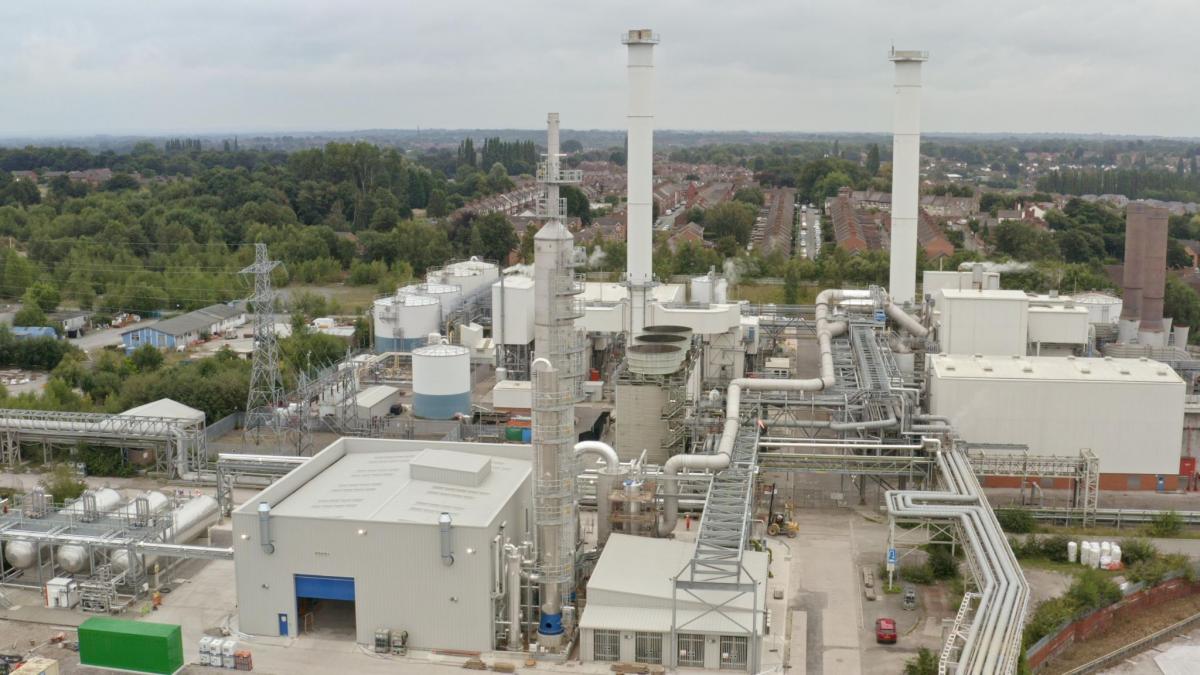 Since operations started in summer 2021, the CCU has significantly reduced TCE's carbon emissions, recycling the these to secure a sustainable supply of carbon dioxide – a key raw material critical to our business’s international growth.

The CCU plant was designed and delivered by TCE alongside Pentair, a leading supplier of carbon dioxide capture and purification technologies.

The first large-scale CCU plant of its kind in the UK, the TCE plant also represents a world first in capturing and purifying carbon dioxide from power generation plant emissions for use as a key raw material in the manufacture of high purity sodium bicarbonate.

Our CCU plant is expected to act as a pathfinder project for other industrial applications of carbon dioxide capture and is an important step in decarbonising industrial activity. The TCE CCU plant will play a major role in supporting the UK government’s target of net zero carbon emissions by 2050.

Speaking about the opening of the plant, Business and Energy Secretary Kwasi Kwarteng said: “This cutting-edge plant, backed by £4.2 million government funding, demonstrates how carbon capture is attracting new private capital into the UK and is boosting new innovation in green technologies.

“We are determined to make the UK a world-leader in carbon capture, which will help us reduce emissions and be a key part of the future of British industry.”

In a unique and patented process, the CCU plant will capture carbon dioxide from the flue gases of our 400MWheat, 96MWelectricity gas-fired, combined heat and power plant, which supplies steam and power to our company’s Northwich operations and other industrial businesses in the area.

The CCU plant will then purify and liquify the gas which will then be stored ready for use in the manufacture of sodium bicarbonate, to be called EcoKarb®. Deploying CCU technology will reduce emissions, as captured carbon dioxide will be used in the manufacturing process rather than being emitted into the atmosphere.

Our CCU plant will be capable of capturing and producing up to 40,000 tonnes of carbon dioxide per year and will reduce TCE’s carbon emissions at the CHP plant by over 10%.  The captured carbon will also support the annual manufacture of up to 130,000 tonnes of high purity sodium bicarbonate which is used in applications such as haemodialysis, pharmaceuticals, food, animal feed and many other applications.

Why TCE Invested in this CCU Plant?

Not only will the CCU plant reduce the carbon emissions from our CHP plant, making it one of the most carbon efficient power plants in the UK, the project will be a springboard for TCE to unlock further growth into our export markets. Global demand for high grade sodium bicarbonate is growing as more of the world’s population has access to healthcare, and TCE already exports 60% of its sodium bicarbonate to more than 60 countries across the globe.

TCE has a strong track record of carbon reduction: since 2000 we have reduced the carbon intensity of our manufacturing by 50% and have plans to reduce our emissions by a further 80% by 2035. We have achieved this through investments such as the CCU plant and in new steam turbines in 2015. 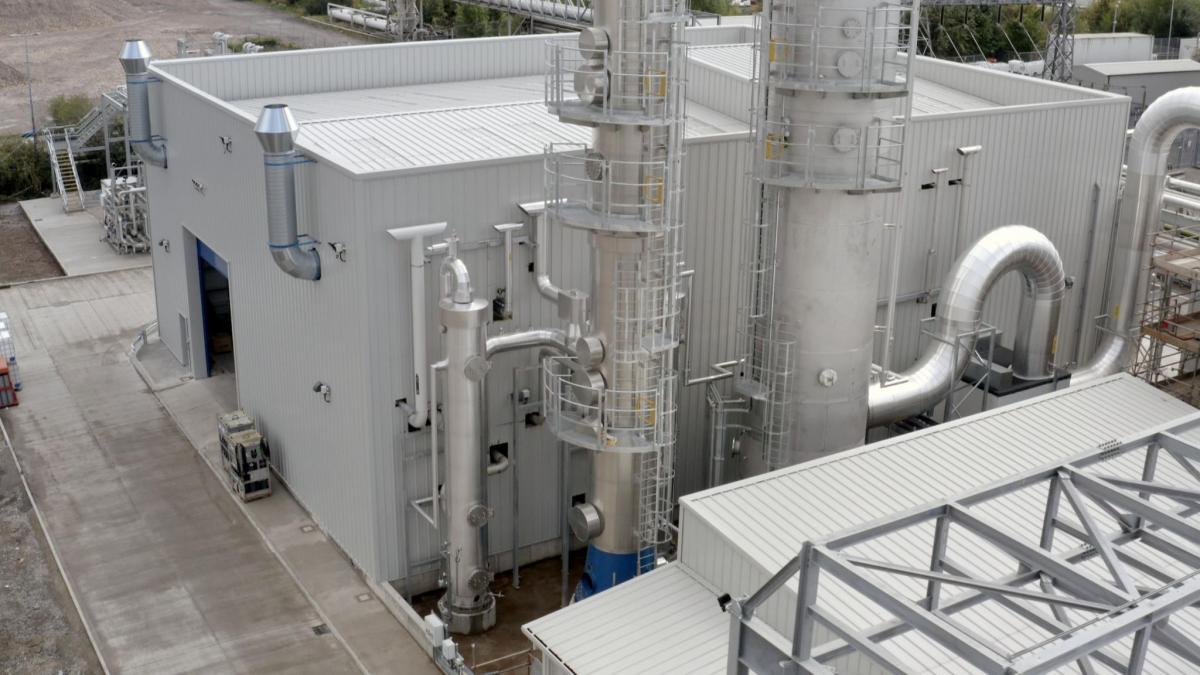 As a result, our business already produces Europe’s lowest carbon intensity soda ash and sodium bicarbonate.  Find out more about our other carbon reduction projects here.

“Implementing this industry leading project with such strong environmental and operational benefits is hugely exciting, and we’re pleased to be working closely with BEIS to deliver the demonstration plant.

“We hope that this project will demonstrate the viability of CCU and pave the way for further applications of the technology to support the decarbonisation of industrial activity.  Our parent company Tata Chemicals Ltd has supported this innovative project, enabling our UK operations to continue to reduce carbon emissions. This project is a great example of business and government working together to rise to the challenge of decarbonising industrial production.”

Our CHP Plant is a Source of Low Carbon Electricity 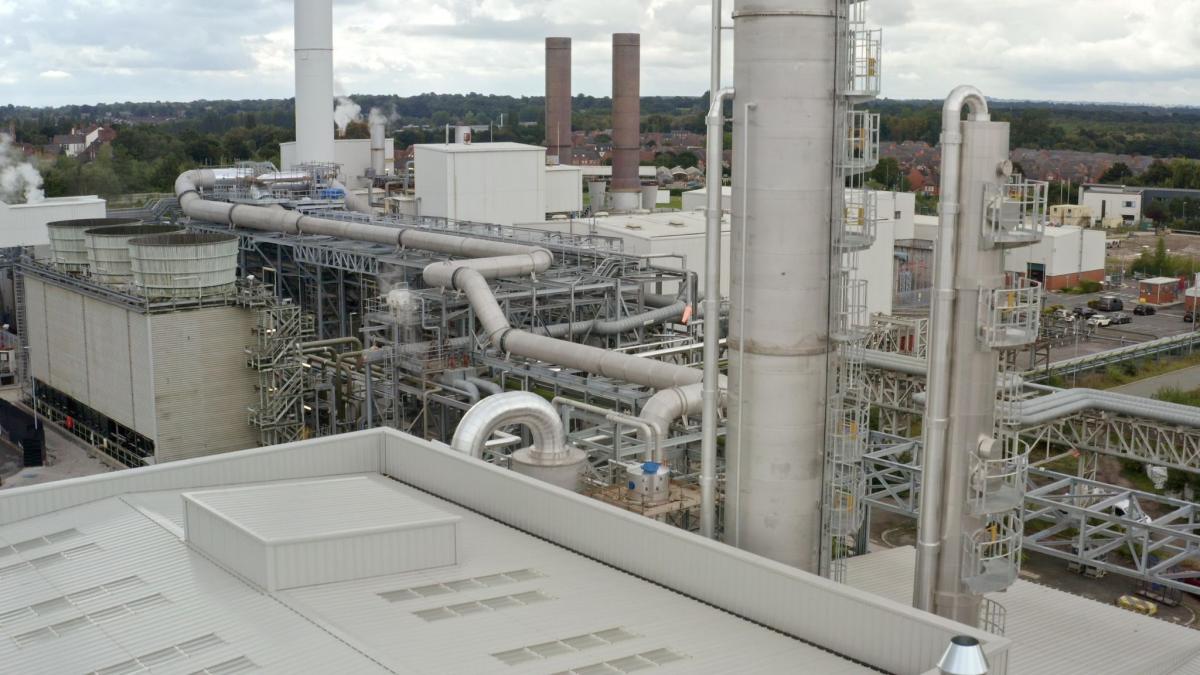 Already one of the most efficient power plants in the UK, our CHP plant is a low-carbon source of electricity, currently producing half the amount of carbon dioxide per kWh of electricity generated compared to a typical gas fired power station. The new CCU plant has reduced the carbon dioxide per kWh electricity generated even further, reducing the carbon intensity of our soda ash and sodium bicarbonate products and sets a new benchmark for the industry.

Another move that will play a major part in reducing the company’s carbon footprint this year is our £10m investment in state-of-the-art boilers and associated infrastructure at British Salt in Middlewich - for more information about this project, please see here.

“Our CHP plant is a unique facility that has been at the leading edge of energy efficiency for a number of years now. It contributes low carbon heat and electricity to our operations in Northwich, making it a key pillar of our ongoing operations.”  Rob Hudson, Head of Energy, TCE.

How We Capture Carbon Dioxide 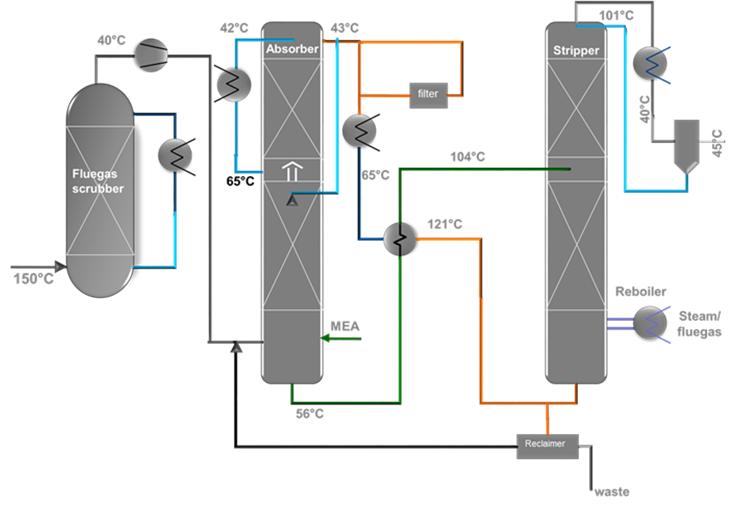 In our patented process of using captured carbon dioxide to make sodium bicarbonate, Pentair have provided the Advanced Amine Technology (AAT) that is used to capture carbon dioxide from energy generation emissions where the carbon dioxide concentration is a small proportion of the waste gases.

The carbon dioxide capture process starts at the emissions stacks at our CHP plant.  Here we draw off exhaust gases at 150oC and transfer them via 1.5m diameter ducting to the CCU plant.  The first step of the process is to cool the gases and remove impurities.  This is done at the flue gas scrubber.

From here the gases are transferred into the 48m tall absorber column where they are mixed with an amine-based fluid that captures the carbon dioxide.

The carbon dioxide rich liquid is then transferred from the absorber to a stripper column, where steam from the CHP plant is used to heat the liquid. The heat causes the carbon dioxide to be released, leaving the stripper as a gas with a purity of more than 99.9% which will meet EIGA (European Industrial Gases Association) standards for high purity applications.

After the carbon dioxide is released, the amine solution is pumped back to the absorber via a reclaimer unit that removes any waste build up, where it is then re-used to capture more carbon dioxide.

How Captured Carbon Dioxide is Purified 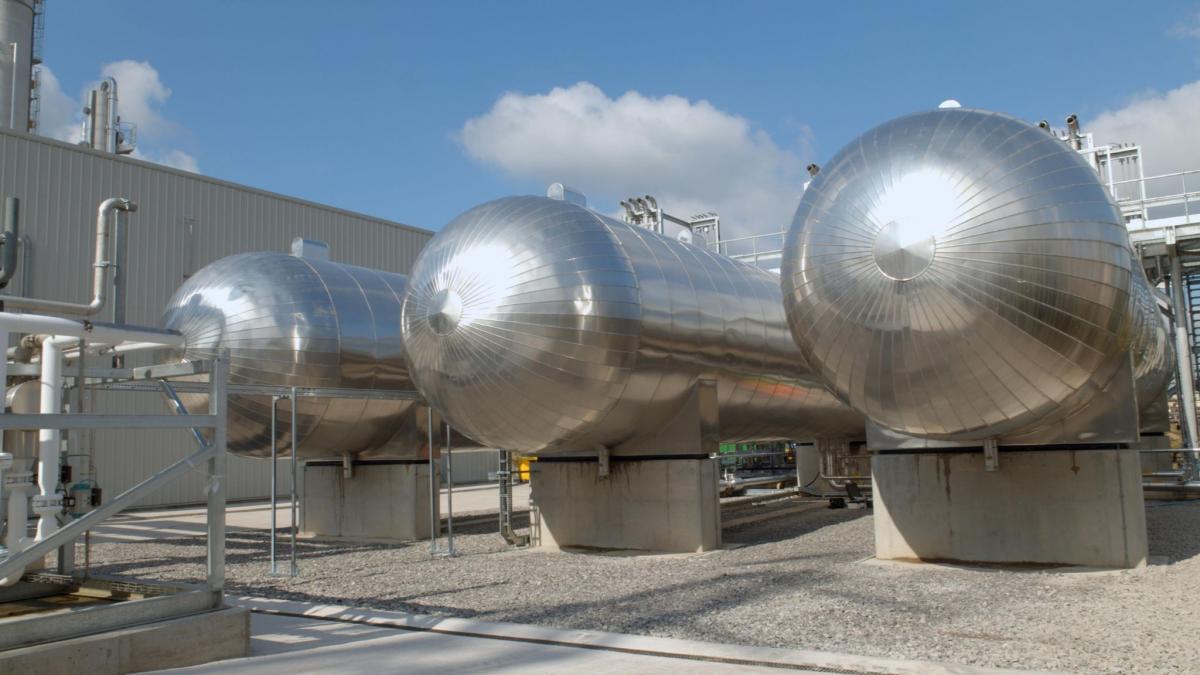 Following capture of the carbon dioxide, the gas is then purified again to ensure that it meets the necessary standards required for use in food and pharmaceutical applications.

The resulting product is a carbon dioxide liquid at 17 barg and -24 °C, with a purity of more than 99.99%, ready for use in our sodium bicarbonate production process which will meet EIG (European Industrial Gases) standard for food manufacture.

"We’ve worked closely with Pentair to develop this unique solution to capture carbon dioxide emissions that are then recycled for use to produce sodium bicarbonate.  The liquified carbon dioxide needs to be at an extremely high level of purity as the end product is used to produce food and medicines.”  Jo Graham, Chief Operating Officer, TCE

Click here to view the CCU brochure for further details